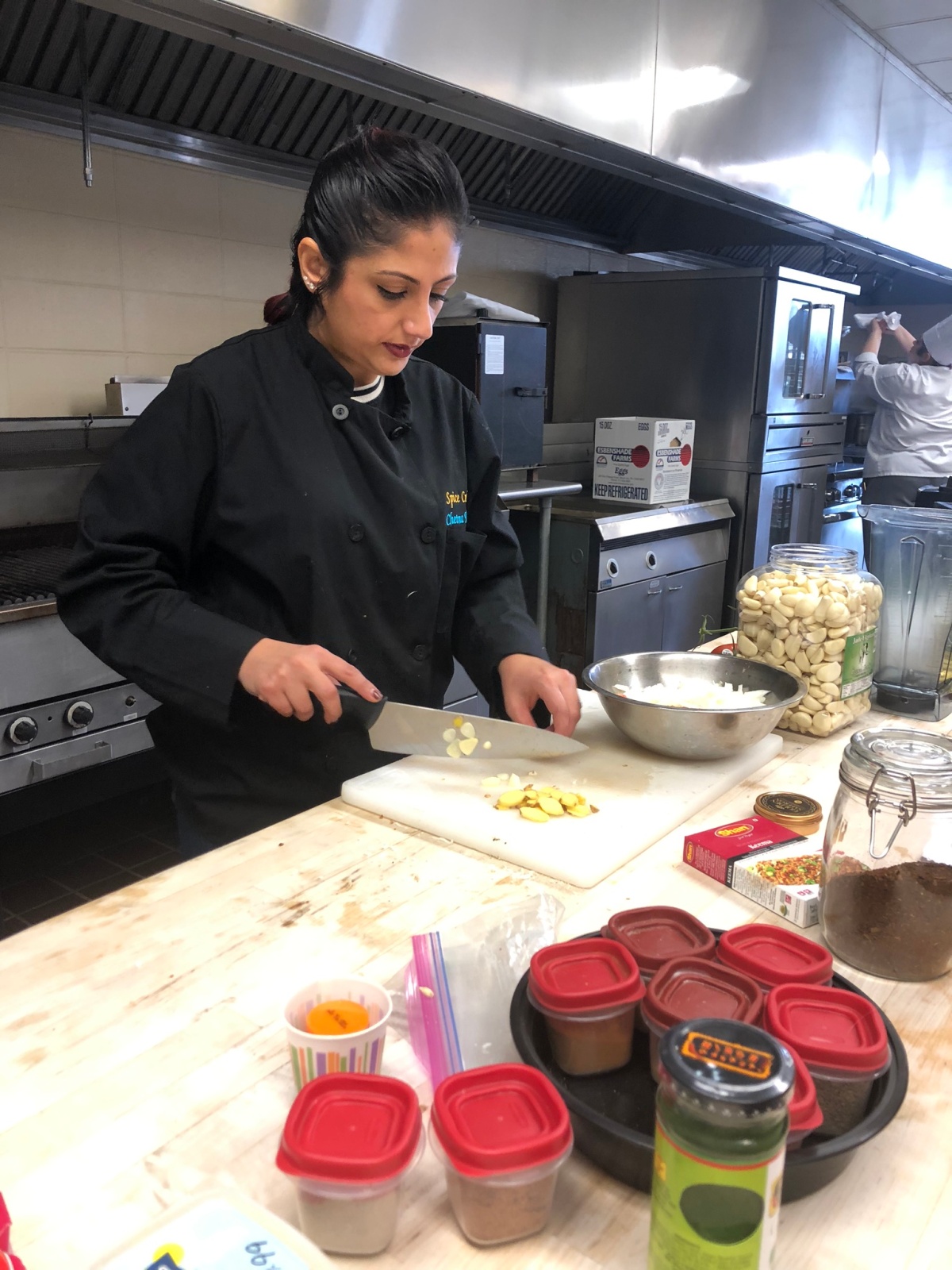 Disclosure: Fork in the Pines was invited to observe one of Chetna Macwan’s classes at Atlantic Cape Community college free of charge.

“I got a noise complaint,” the security guard joked when he walked into our classroom at Atlantic Cape Community College this past Saturday. Six students were gathered to learn the art of Indian cooking from South Jersey Chef Chetna Macwan. I was there to learn and observe.

The guard had never tasted Indian food, but the spicy aroma had enticed him to check out our class.

“It’s REALLY good,” one student told him. “You have to try it.” He conceded and took a bite. One bite led to another. He was glad he stopped by.

When a meal’s aroma can lure someone into a room and convince him to try a new cuisine for the first time, the chef must be good. Better than good. Before I left, I told Macwan that her Indian food was the best I’d ever tasted. I wasn’t buttering her up (pun intended). I was speaking the truth.

We started with dessert. Macwan taught us to prepare khajur burfi, or Indian almond and date balls. Easy enough for beginner chefs, khajur burfi contains just five ingredients – and no added sugar. The almonds are toasted and combined with cardamom, dates, and ghee, a clarified butter common in Indian recipes.

Macwan and another student rolled the mixture into balls and coated each with shredded coconut. Then we got to taste them. The khajur burfi’s buttery, toasted flavor had me reaching for seconds (and, admittedly – thirds).

Macwan then demonstrated how to make a hariyali marinade. Her sous chef, Juliana Torres, helped prepare the marinade’s ingredients. I noted Torres’s technique of rolling the lemons on the counter before juicing them. The marinade also contained lots of fresh cilantro and mint, which makes it especially well-suited for summer meals. Harilayi is the Hindi word for “greenery,” a reference to its bright green hue.

While Macwan’s recipes are rooted in traditional Indian cuisine, most of them have been modernized. By using a Vitamix blender, Macwan was able to reduce preparation and cooking time without sacrificing flavor. With a blender, home cooks don’t need perfect knife skills either, since all the ingredients are pureed.

Macwan suggested we use a blender at home to prepare the hariyali. Then, we can freeze a large batch and divvy it into small portions inside an ice cube tray. The marinade contains a special spice blend Macwan jokingly dubbed, “Chet’s Chix Mix,” telling us that it’s ideal for quick, weeknight chicken or seafood meals.

We ate the marinade over chicken breast. A versatile blend, Macwan suggested other ways to enjoy it at home. She recommended serving the hariyali with chicken wrapped inside Naan bread and topped with garlic chutney and yogurt.

“You can almost eat it like a gyro,” Macwan elaborates. The marinade also works well with paneer, a popular Indian cheese.

I was relieved to still have room in my stomach for more food. We still had two dishes to make. Next up was lamb and pea keehma, a ground meat dish that can be eaten with rice or used as a filling for savory Indian pastries called samosas.

As Macwan started to make the kheema, she stressed the importance of frying Indian spices in oil at the start of a recipe. While I’ve made my own version of Indian cuisine at home, I had never added my spices at the beginning as she did. Of everything I learned on Saturday, this technique fascinated me the most.

“Flavoring that oil is really key,” Macwan says. Infusing the spices with the oil ensures a dish with a consistent flavor throughout, as the seasoned oil seeps into every bite.

As we cooked, Torres prepared the basmati rice. Macwan had instructed her to cook the rice using a technique she calls “pasta style.” Rather than cooking the rice in a covered pot with a specific ratio of water to rice, Macwan allows her rice to simmer in an uncovered pot filled to the brim with water.

On the top of the water, she adds Indian aromatics like cinnamon sticks, star anise, and cloves. After she checks the rice to ensure its doneness, she removes the aromatics from the pot. (See Macwan’s blog post on “pasta style” rice.)

With the rice ready to be eaten, we started cooking our final dish: chicken makhani. Makhani is the Indian word for “butter,” appropriately named for the multiple sticks of butter it contains. Traditionally, makhani simmers on low for several hours with tandoori-style meat. This “low and slow” method of cooking allows the ingredients to integrate into one smooth-textured gravy.

But Macwan uses a blender to prepare her makhani, allowing the ingredients to fully combine before being cooked on the stove. By modernizing the dish’s preparation, Macwan reduces the cook time to 34-45 minutes. The shorter cook time makes the recipe much more accessible to novice home chefs like myself.

As she cooked, Macwan explained the difference between chicken makhani and another popular Indian dish: chicken tikha masala. Whereas makhani gravy is smooth, tikha masala contains chunks of vegetables like bell pepper and onion. While makhani also contains pepper and onion, all the ingredients are integrated into the gravy. (Macwan joked that makhani is a perfect dish for her young son, who doesn’t like to see any of the vegetables he’s eating.)

Traditional makhani contains yogurt, but Macwan prefers to use heavy cream. The cream mellows the gravy, resulting in a lighter dish. Jaggery, an Indian-style brown sugar with a molasses-like flavor, adds a hint of sweetness to the makhani.

Macwan instructed us to leave some fat on the chicken thighs. The fat flavors the dish and thickens the gravy. I was relieved to hear her say this. I already leave fat on my chicken thighs. Now I have an excuse other than laziness.

Once we all had a plate of rice, kheema, makhani, and naan bread in front of us, the room grew silent. Everyone ate together, and no one voiced a single complaint. When we were finished, Torres – who is a pastry chef – dished out some of her flan dessert. (Yes, we had two desserts!) The flan was creamy, light, and coated with a sweet, caramelized sauce.

I left inspired to try cooking Macwan’s recipes at home. After smelling the pungent aroma of her spices, I knew I needed to shop for some fresh spices of my own. (Mine have sat in my pantry far too long.)

After purchasing some fresh ingredients – like cloves, star anise, cardamom, and cinnamon sticks, my house filled with the aromatic scent of curry. I haven’t even cooked with them yet. Coming downstairs this morning, my mouth watered just thinking about the makhani I plan to make for dinner tonight.

Beginning on March 16, Macwan will be teaching another series of classes called, “Indian Style Breads.” The course, which will also take place at Altantic Cape Community College, will cover flat breads, fried breads, and stuffed breads. The campus is set in a beautiful, heavily forested area of Mays Landing about a half hour from the Jersey Shore. Find out more on their website.

Macwan also offers private group cooking classes. If you’re looking for a creative gift for the foodie in your life or even a date night idea, contact her to find out more. You can read more about Macwan’s cooking adventures on her blog Spice Culture. Follow her on Instagram and Twitter.